Inflatable Boarder is reader-supported and may earn a commission when you buy through links on our site. Learn more 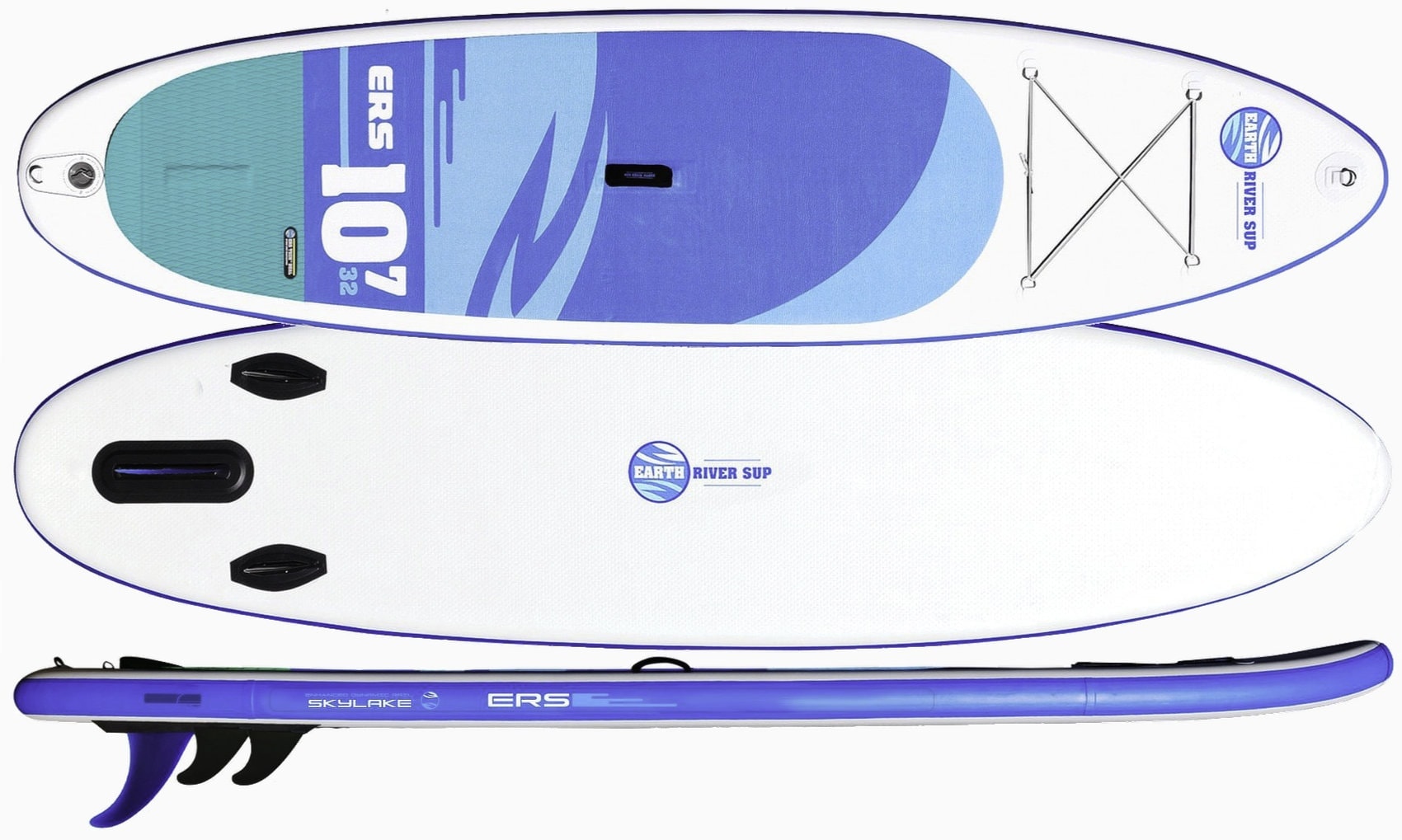 WANT US TO REVIEW THE
ERS 10-7 SKYLAKE BLUE?

A versatile all-around board that’s designed to do it all, the 2019 Earth River SUP 10-7 SKYLAKE BLUE builds on the company’s popular SKYLAKE GREEN series with the addition of an upgraded fin system. Perfect for paddlers who want the ability to experiment with various fin configurations, the ERS 10-7 SKYLAKE BLUE combines a center US fin box with two side click fins for the ultimate in versatility.

The 10-7 SKYLAKE BLUE can be paddled with a single fin, twin fins, or three fins using either of the included center fins. Earth River SUP throws in a larger 8” fin for improved tracking and a shorter 4.5” fin for paddling in shallower waters.

Like the smaller 9-6 SKYLAKE BLUE and larger 11-0 version, this board is recommended for all-around flat water fun, SUP fitness, small surf, and even whitewater.

As with all of Earth River SUP’s paddle boards, the 10-7 SKYLAKE BLUE features a premium EVA foam traction pad that covers a large portion of the board’s top deck. In addition to the nice color scheme and eye-catching graphics, the deck pad utilizes multiple traction patterns for optimal grip. The larger, front portion of the pad features a croc pattern while the smaller tail section incorporates a diamond groove pattern for increased grip.

Also located at the rear of the traction pad is a foot bar and raised kick tail for improved control in the surf and when performing advanced pivot turns. This is a feature that isn’t seen in many of our inflatable paddle board reviews and it’s nice to have.

At the nose of the 10-7 SKYLAKE BLUE is a 4-point bungee storage area for securing your paddle, dry bag, snorkeling gear, and other paddle board accessories. ERS used high-quality stainless steel D-rings which are also useful as tie-down points for larger loads.

There’s also a handy D-ring mounted to the end of the SUP’s nose which can be used for towing or tethering the board.

The tail features a final D-ring for securing a SUP leash as well as a high-quality inflation valve.

In terms of construction, the company went with their Tech Dual fused laminate construction on this board. They also integrated ERS Enhanced Dynamic Rail reinforcements for added stiffness and improved overall performance.

Additionally, you can get a free 3-piece carbon paddle, free safety leash, free handheld pressure gauge, and a 5% discount by using the coupon code BOARDER during checkout (more details below).

Earth River SUP also includes a 2-year warranty on all of their inflatable paddle boards which covers any and all manufacturing defects. For added peace of mind, there’s also a 30-day money back guarantee.

There are no reviews yet. Be the first one to write one.

Have you paddled ERS’ 10-7 SKYLAKE BLUE SUP before? If so, let us know what you think of the board!

Where to Buy it + Coupon Code Promo

The Earth River SUP 10-7 SKYLAKE BLUE is currently in stock and ready to ship here. In addition to the lowest price, free shipping, and no sales tax (unless required by your state), you'll also get a free 3-piece carbon paddle, handheld pressure gauge, and SUP leash. Also, be sure to use the coupon code BOARDER when checking out for an additional 5% discount!